Our 2nd team widened its lead in Division 2 of the Middlesex League, with a convincing win against West London. With 10/11 match points and 3 matches remaining, promotion remains a realistic possibility.

As the non-playing Captain of the match, I travelled with the team to lend moral support. I actually forgot who we were playing, and who was in the team, but apart from that I proved quite useful and took some photographs which appear below.

We won the toss and I elected to take black on odds, which suited most of the team and their playing styles. Then I went to Waitrose and Sainsbury’s. When I returned, the temperature in the playing room had doubled.

Tim ‘played an uneven game, full of holes’ – according to him. From my point of view his Advanced French and his tactical awareness were v. good, and made him the first game to finish, with a victory against a tough opponent. 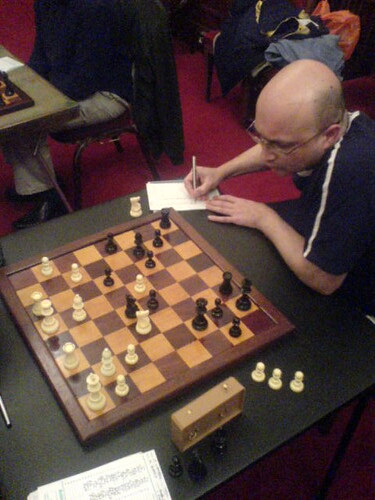 Mike played very well and secured a dream setup, but like a lot of great positions it wasn’t clear how to take advantage of it. He continued to put his pieces onto good squares, and somehow this mutated into a great combination which blew white’s position open! In the pic you can see his opponent has just played the move Ne2-f4 in a vain attempt to stem the flood of pieces into his kingside.

Dan had decided early on to follow Mike’s lead and play solidly, and this really paid dividends in a long struggle in which it was not clear whether black’s large centre was weak or strong.

Liz was better, and miscalculated in a fit of enthusiasm to discover her lucky oppponent had a zwischenzug which won the exchange.

Helge, solid as a rock, drew.

Rob ‘lost’ the exchange, but the absence of the light squared bishop in the long run led to an invasion on the long white diagonal.

Our new and rising star (how many cliches can I use in one report?) Ayhan had loads of pressure against the very passive play of his Russian opponent. I thought he did brilliantly to sac a pawn to go into a winning endgame, and then almost blew it in time trouble. His opponent missed a draw right at the very last second!